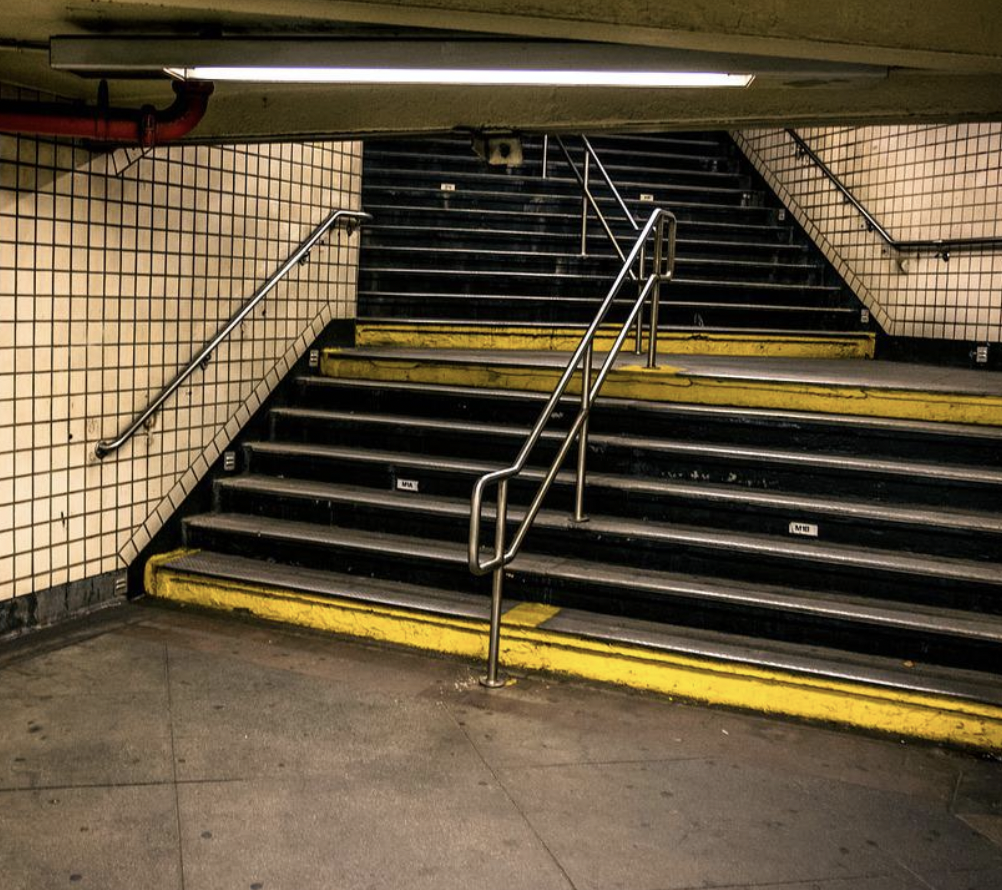 It was late and she was heading home. The unremarkable buildings and the flickering street lights reminded her that she was not in one of the better areas of the city. During the daytime, it looked innocuous enough but at night when the shadows got deeper, the smell of weed and liquor wafted freely and the silvery moonlight induced mystery to every corner, she knew she had made the mistake of not leaving earlier. Her attire and persona indicated that she did not belong here. Her hurried steps accelerated further as soon as she heard distant shouts and sounds of breaking bottles. She willed herself to stay calm and aim for the subway entrance a block away. She heaved a sigh of relief when she reached the stairs leading to the subterranean station.
Though she ran down the stairs and rushed through the turnstiles, she missed the train. She would have to wait for the next train which was almost twenty-five minutes later. As she waited a movement caught her eye. The dreary grimy subway platform, with sometimes almost a nauseous smell, could be home to unsavory characters. Since it was deserted, she was a little apprehensive when she saw the lone figure shuffling at one end of the platform. He had many layers of clothing over him and carried a large bag overflowing with dirty clothes and newspapers. He was unshaven and had a slight limp as he hobbled on the platform. She could get a whiff of homelessness from his direction. He looked grumpy and unpleasant. She could hear him muttering and spitting onto the tracks. She fumbled in her handbag for her mobile phone and pulling it out pretended to check it. She knew there would be no signal. The man seemed to actually come in her direction. She didn’t want to look rude by moving away. Maybe he’s trying to get closer to the fan, she thought, looking in his direction surreptitiously. She looked at the fans spewing warm air. He moved past one of them. Now it was definite he was making his way towards her. Unnerved and refusing to make eye contact she moved casually towards the turnstiles where it was better lit. The man was undeterred. Her peripheral vision indicated that the man was laboriously bending down. It was an unsightly scene. Not knowing what to do she decided safety was more imp than “seeming” or “not seeming” rude. She made it to the turnstiles. Just then she heard him call out to her. Hesitating she turned slowly and dared to look back. She saw he held a black object in his hand and without waiting she dashed out the turnstiles and up the stairs. He kept calling out as her back disappeared from view. Then he looked at the slim leather designer wallet in his hand. It had fallen down when she had taken out her phone. He would have to turn it over to the transit authority and he hated interacting with them. Oh darn!