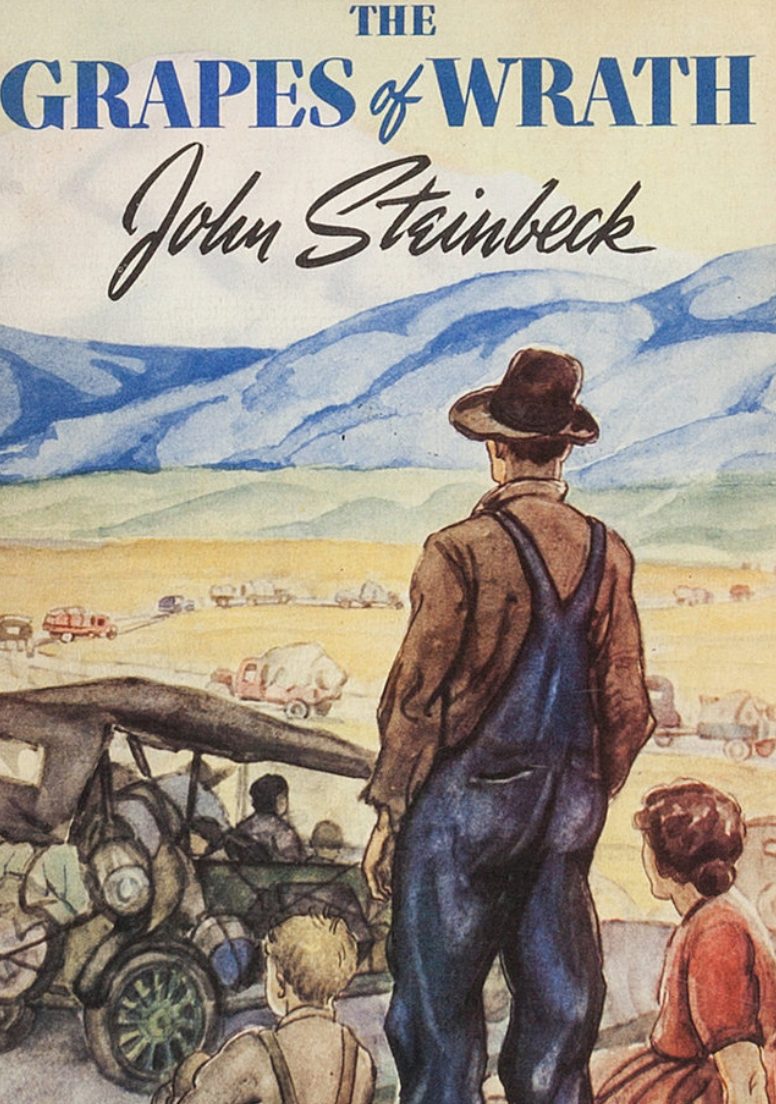 Author: John Steinbeck, a 20th-century American writer
This Pulitzer Prize-winning novel by the Nobel Laureate author describes a crucial period in the history of the United States of America – the Great Depression. It follows the farming family of the Joads, as they leave their native Oklahoma following a severe drought, and travel to California looking for work. The plight of the dispossessed migrant laborers on the road and in camps, the anger and frustration of people trying to earn enough to keep body and soul together, and the exploitation they face at the hands of the rich land owners and the authorities, – all of this has been skillfully portrayed in this brilliant piece of literary fiction.
The agricultural lands of Oklahoma have turned into a ‘dust bowl’ where little grows in the early 1930s. The farmers are finding it exceedingly difficult to eke out a living. Tom Joad is released from prison where he had been serving a sentence for accidentally killing a man in a fight. He returns to his family farm by getting a lift from a truck driver, who tells him how tenant farmers like the Joads are being forced off the land by its owners. On the way to the farm, he comes across the former preacher Jim Casy. He now has a very different way of viewing religion. He believes in humanity and equality above all, rather than the conventional concepts of piety and sin.
Together they arrive at the farm and find it abandoned. They hear from neighbor Muley that the tenant farmers are being evicted and lending banks are demolishing their houses with tractors. Farming work is becoming mechanized with one tractor replacing many families. Muley informs them that the family has gone to live with Tom’s uncle John, where Tom found them making arrangements to travel to California in search of work. The family then sells off everything they can spare to gather enough funds.
After the cantankerous old grandpa is sedated and put on the truck, the motley group starts on their uncertain journey in a rickety vehicle. It includes Tom’s parents Ma and Pa Joad, slow-speaking elder brother Noah, younger brother Al, pregnant sister Rose of Sharon and her husband Connie, his little sister Ruthie, the youngest child Winfield, his paternal grandparents, and Uncle John, along with Tom and Casy.
The tenant farmers, farmhands, and laborers are all heading towards California and the hope of a better existence by US Highway 66. They are soon joined by Ivy Wilson and his ailing wife Sairy, whose truck had broken down. On their first night on the road, Tom’s grandfather expires, and his grandmother begins to sink thereafter. Finally, she too succumbs while crossing the Arizona desert. By then they had already parted from Noah, who left to stay near the river; and the Wilsons, the dying Sairy being too weak to travel further. Soon after they reach California, Connie abandons Rose of Sharon to go his separate way.
This cross-country journey gives the Joad family a new perspective on life. Their fellow travelers and the people in the migrant camps are also struggling for sustenance just as they are. Ma Joad ensures that they hold on to their family values in the midst of all their privations. Their troubles continue unabated even after they reach California. The migrants from Oklahoma are called ‘Oakies’ here, a derisive term that shows the contempt the local people hold for them, though they themselves had emigrated here not so long ago.
Highway 66 takes the Joads to Bakersfield in California, and subsequently, they move into a migrant camp called Hooverville. They realize that there were so many migrant laborers competing for the jobs available that the landowners could easily get away with paying very low wages. They strike up an acquaintance with Floyd Knowles, who insists on getting a proper contract drawn with a minimum wage guarantee when a contractor offers them work. This results in a violent argument and Casy is arrested when he strikes a policeman. Knowles learns that the police are planning to burn down Hooverville, and so the Joads take to the road again.
The Oakies are not the only ones suffering. The local small farmers cannot compete with the low prices charged by the large landowning farmers, who employ cheap migrant labor. The local laborers are finding their wages slashed as the supply of labor increases in the form of Oakies. The Joads, like hundreds of others, fail to find steady and regular work. Hence, in spite of the conditions being much better in their next camp Weedpatch, under government administration, they still leave and travel to Hoover Ranch to pick peaches.
The authorities, law enforcement personnel, and rich landowners were not at all sympathetic to the workers. At Weedpatch, Tom learns that the police were planning to instigate a riot among the workers. Being forewarned, this impending mishap could be successfully foiled by them. At the peach farm too, they realize that they were brought in because the earlier farmhands had gone on a strike. Tom finds Casy here back from jail and organizing the migrant laborers. The landowners have him killed by the police due to this, and Tom kills a policeman to avenge the murder.
The Joads move to a cotton field and share a boxcar with the Wainwright family, and Al becomes engaged to young Agnes Wainwright. Tom hides near his family in the fields till Ruthie tells another girl about Tom. Ma Joad then advises Tom to leave to avoid imprisonment. The rains start and make life even more difficult. The men become angry and women weary, and Rose of Sharon’s pregnancy ends in a stillborn child.
The Joads take shelter in a deserted barn to escape the floods. There they find a dying man and his young son. The boy says his father is starving having given his share of food to his son. Rose of Sharon then breastfeeds the man.