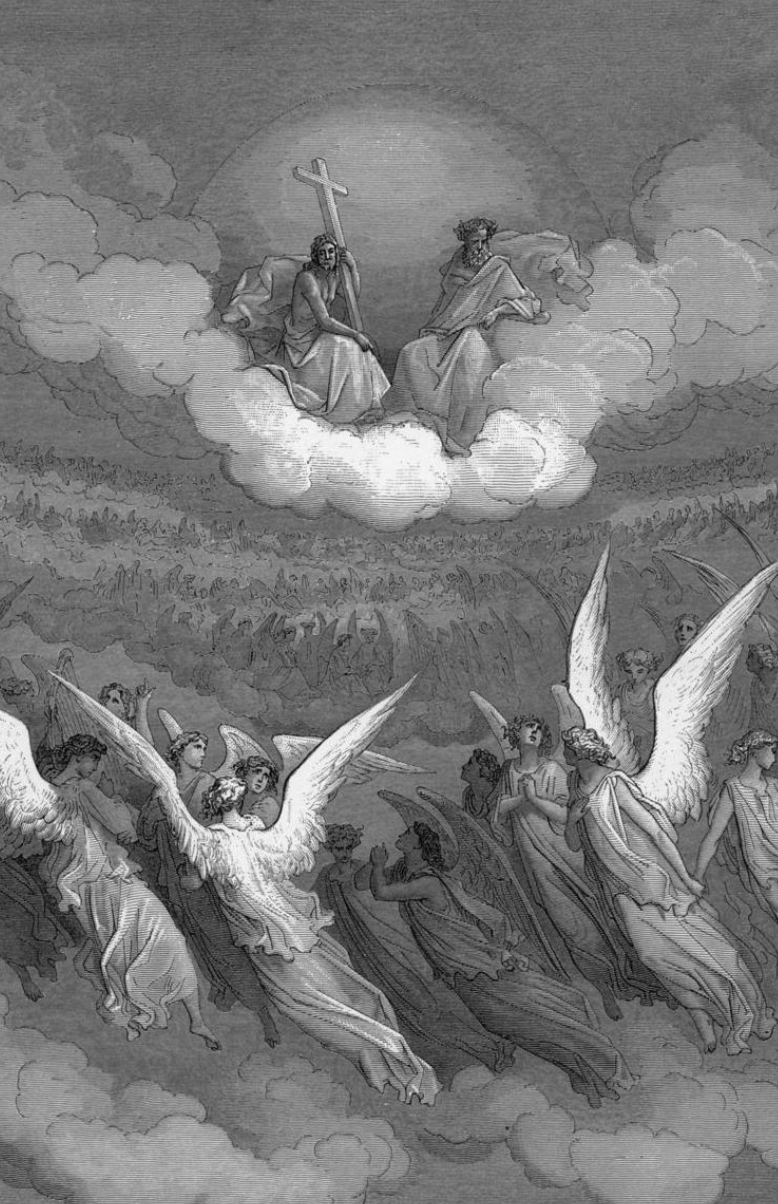 Author: John Milton, a 17th-century English poet and intellectual.
Written in unrhymed verse in the seventeenth century, this epic describes the fall of Man from God’s grace through the machinations of the evil Satan. Satan and the angels he led in rebellion against their creator were defeated by God, and they are now fallen from grace inhabiting the fiery land of Hell. Satan presides over the council of fallen angels at his capital Pandemonium in Tartarus, the underworld where they are held captive, trying to find a way to retaliate. Beelzebub, one of his chief companions, suggests that instead of directly attacking God, they can try to ruin a new race God has created called Man. According to Beelzebub, Man is less in power and excellence than the fallen angels, but is still favored by God over them.
Satan decides to confront Man and journeys to the gates of hell, where he meets Sin. Sin has sprung from his mind, and Satan then mated with her to create their offspring Death. She guards the gates of Hell with the Hounds of Hell, which she now opens for Satan. Satan then braves the fearsome Abyss, travels through Chaos meeting Old Night, and reaches the new world Beelzebub described. This is Earth, the abode of many creatures, of which the supreme creature made in the likeness of the creator himself is Man.
God, the omniscient and omnipotent, knows that Satan has escaped from Tartarus and has gone to meet and corrupt Man. He tells his Son he wishes to be merciful towards Man, provided Man obeys Him. However, Man is going to be tempted by Satan and will be punished for his misdeeds. The Son of God then offers to go to earth and sacrifice himself for the redemption of Man. Earth is joined to Heaven by a golden chain, and guarded by the angel Uriel. After crossing Limbo, a place between Heaven and Earth, for the dead not accepted in Heaven or sentenced to Hell, Satan reaches Uriel.
Uriel fails to recognize Satan disguised as a cherub and guides him to Earth, where the first Man, Adam, dwells with his companion Eve, the first woman. God had first created Adam, who asked God for a companion. Hence, God created Eve from Adam’s rib. God has only one commandment, they should not partake of the forbidden fruit of the Tree of Knowledge. Satan overhears this in the Garden of Eden, where he hides by taking the forms of various animals. He influences Eve’s dreams as she sleeps.
Uriel realizes that the cherub is Satan and informs Gabriel, the chief guardian of Eden, who challenges Satan. God sends the angel Raphael to Adam and Eve, and he tells them about Satan. Satan detests serving God and being subordinate to the Son of God. He led the rebel angels against the archangels in battle without either side winning. Then the Son of God alone appeared and single-handedly defeated Satan. God then created Man to take the place of the fallen angels.
Eve asks Adam to let her be on her own. Satan, in the form of a Serpent, entices Eve to eat the forbidden fruit. Adam is unhappy that Eve has disobeyed God, but he wishes to follow Eve and share her fate. He too eats the forbidden fruit and they make love in a verdant bower on a couch of flowers, and fall asleep. Adam now remembers Raphael’s warning that if they disobey God, they would share the fate of the fallen angels.
Adam and Eve are ashamed of their nakedness, which they cover with fig leaves, and argue about their forbidden act. Adam remonstrates with Eve for leading him to temptation, and she retorts that Adam should have stopped her from going away alone and becoming a prey to Satan’s conspiracy. They then seek God’s forgiveness, but God condemns them to leave Paradise. The Son of God descends to Eden to deliver the judgment as God’s vicegerent, stating he will temper justice with mercy.
The Son rebukes Adam for listening to Eve, rather than to God. He says Adam was placed higher than Eve as his perfection far excelled hers in dignity. Eve was made attractive merely to easily get Adam’s love, not his subjugation. He then punishes Eve to conceive children with great pain, and to forever submit to her husband’s will, her husband always ruling over her. His punishment for Adam is that the ground will be cursed for him, the resistance of which he has to overcome by tilling to get his bread.
Satan returns to Hell and meets his daughter Sin and the son he had with her called Death. Sin praises him as the only worthy antagonist of Heaven’s king, God. She implores him to join them in preying on Man and his world, to which they have built a bridge from Hell. Satan then goes to Pandemonium where all the fallen angels have turned into serpents. Satan tells them the Serpent has been punished to live in perpetual enmity with Man. The Serpent will bite man’s heel while Man will crush Serpent’s head. Satan too is turned into a serpent, a huge python.
Adam continues his recriminations of Eve, calling her the fair defect of nature, till she suggests that instead of dreading Death and destruction, they bring Death upon themselves now, thereby cheating Death from afflicting their as-yet-unborn children. Adam convinces her that they should appeal to God’s benevolence. The Son of God pleads on their behalf and God determines to send the Son to Earth in the future to save Man.
Archangel Michael takes Adam to the Mountain of Contemplation, where Adam is then shown the history of Man according to the Old Testament of the Bible as a vision of their future. Eve dreams of the same vision. The two are then led out by Michael to wait on Earth for the Son of God to appear and deliver their progeny from evil.

The Diary of a Young Girl