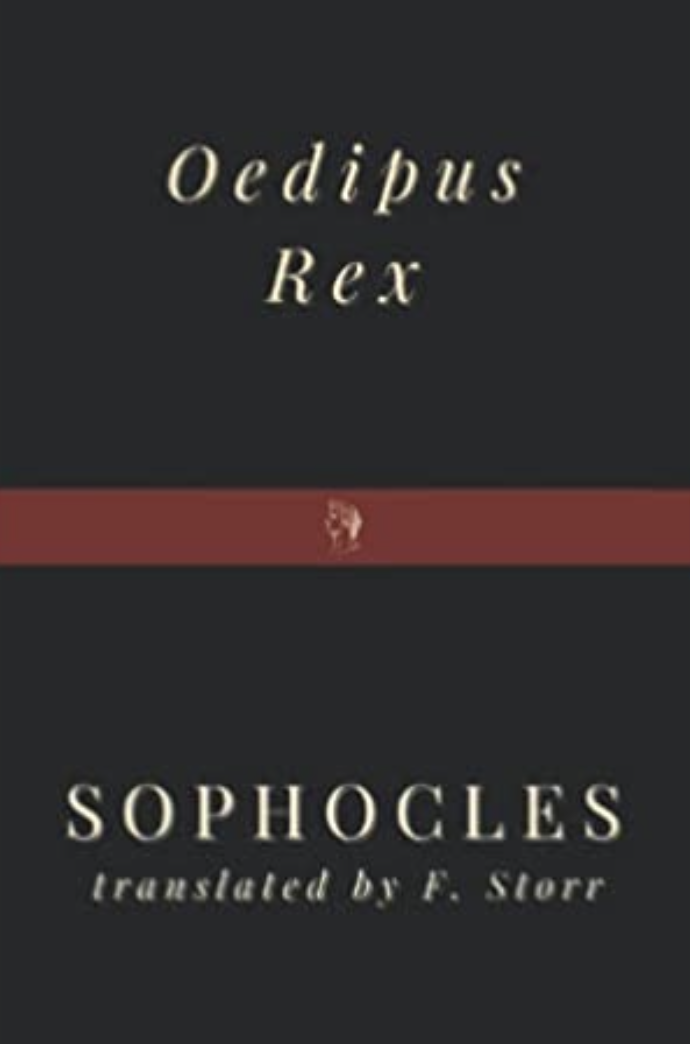 Author: Sophocles, an ancient Greek tragedian
King Oedipus, the 5th century B.C.E. Greek play by Sophocles, narrates the tragic tale of Oedipus, drawing on legends and myths of ancient Greece. Though the plot of the story was known to all at the time of writing, the intensely evocative play was a tremendous success, and indeed remains popular to this day.
The play is enacted in several acts and starts by showing Thebes, the kingdom of Oedipus, suffering from a severe pestilence. It strikes both humans and crops, making them infertile. Oedipus tells his people that Creon, the brother of his queen Jocasta, has been sent to the Oracle at the temple of Apollo, to seek guidance for ending the epidemic. Creon soon returns with the tidings that the pestilence will only end when the killer of the previous king of Thebes is found and justice is meted out. It was also said that the killer was still in Thebes. Now, the previous king was called Laius, who was married to Jocasta. She had married Oedipus after she learned of his death at the hand of robbers.
Oedipus takes an oath that he will ensure the well-being of Thebes by finding out who had murdered Laius and punish him by banishing him from his country. For this purpose, he summons the old and blind clairvoyant Teiresias on Creon’s advice. However, the seer does not outright give Oedipus the answer he is looking for. Instead, he says that the king should not seek the killer. Oedipus insults and threatens the old man with a death sentence, and at last, he pronounces that the king is himself the murderer. He further states that Oedipus is living in sin with his mother as his wife, and is himself the cause of the plague afflicting his people. He even predicts that though Oedipus had entered the world with sight, he will leave it in blindness.
Oedipus is enraged at this accusation and readily blames Creon for conspiring with the prophet against him. However, due to Jocasta’s mediation, Creon is not immediately arrested as a traitor. When Oedipus tells Jocasta about the prophecy, she placates him by saying that such seers are not to be believed. They often foretell false prophecies. She recounts that it was foretold that Laius would die at the hands of his own son, while she knew he had been killed by a group of five robbers. She also tells him that to ensure that the prophecy does not come true, their infant son was left to die on a hill, with his ankles secured with a pin.
This does not put her husband’s mind to rest. He remembers killing an older man in a skirmish before coming to Thebes, at a location where three roads meet, which is exactly the description of where Laius drew his last breath. Oedipus had actually left his father’s kingdom Corinth after hearing a similar prophecy. When he heard in his youth that those he knew as his parents were in reality not so, and could not get a satisfactory reply from his mother Merope, he consulted an oracle. It was then foretold that he would kill his father and marry his mother. Oedipus had gone far away from his father to avert the prophecy of patricide. When on his wanderings, he reached Thebes and answered riddles posed by the Sphinx, Creon gave Jocasta’s hand to him as a reward.
Oedipus calls for the witness who had conveyed the news of the previous king’s death. While they are waiting, a messenger comes with the news of the death of the Corinthian king Polybus. Oedipus and Jocasta interpret this to mean that the prophecies are untrue since Oedipus had not killed his father Polybus. Still, Oedipus is hesitant to meet his mother fearing the prophecy regarding her.
The dramatic sequence of events being portrayed in the play is now to be pieced together with the messenger’s story. He tells Oedipus that Merope is not his mother, and he has nothing to be afraid of. In fact, he says that Polybus and Merope had merely adopted him as their own. The messenger had himself brought them the child years ago, when he in turn was given the child by a herdsman. The child had his feet bound and pierced with a pin resulting in his name Oedipus – one with swollen feet.
In spite of Jocasta entreating Oedipus not to pursue the mystery of the killing of Laius any further fearing the worst, Oedipus orders the herdsman to be found and brought to him. Coincidentally, the witness to the killing of Laius is also the same shepherd. He provides the last piece of the puzzle narrating how he had been given the royal child by a servant of the palace to be left on the hill; and how he had taken pity on the child and handed him over to the messenger from Corinth.
Oedipus is devastated to find that in spite of all his efforts, the prophecies have been fulfilled. He soon learns that Jocasta, who is his mother and wife, and the mother of his four children, have committed suicide by hanging herself in her room. In a fit of utter despair, he uses her golden brooch to blind himself. He then tells the people that he could not face his children and subjects anymore, so he took out his eyes. He could not kill himself because he could not face his parents in the afterlife.
The play ends with Oedipus entrusting Creon with the care of his two daughters Antigone and Ismene, who he feels will probably never be married due to their strange lineage. True to his vow of punishing the killer of Laius with exile, he obtains Creon’s permission to leave the kingdom forever. Creon pledges that once he has consulted the Oracle, he will make the necessary arrangements for Jocasta’s funeral, and for looking after his nieces.

The Diary of a Young Girl

The Grapes of Wrath