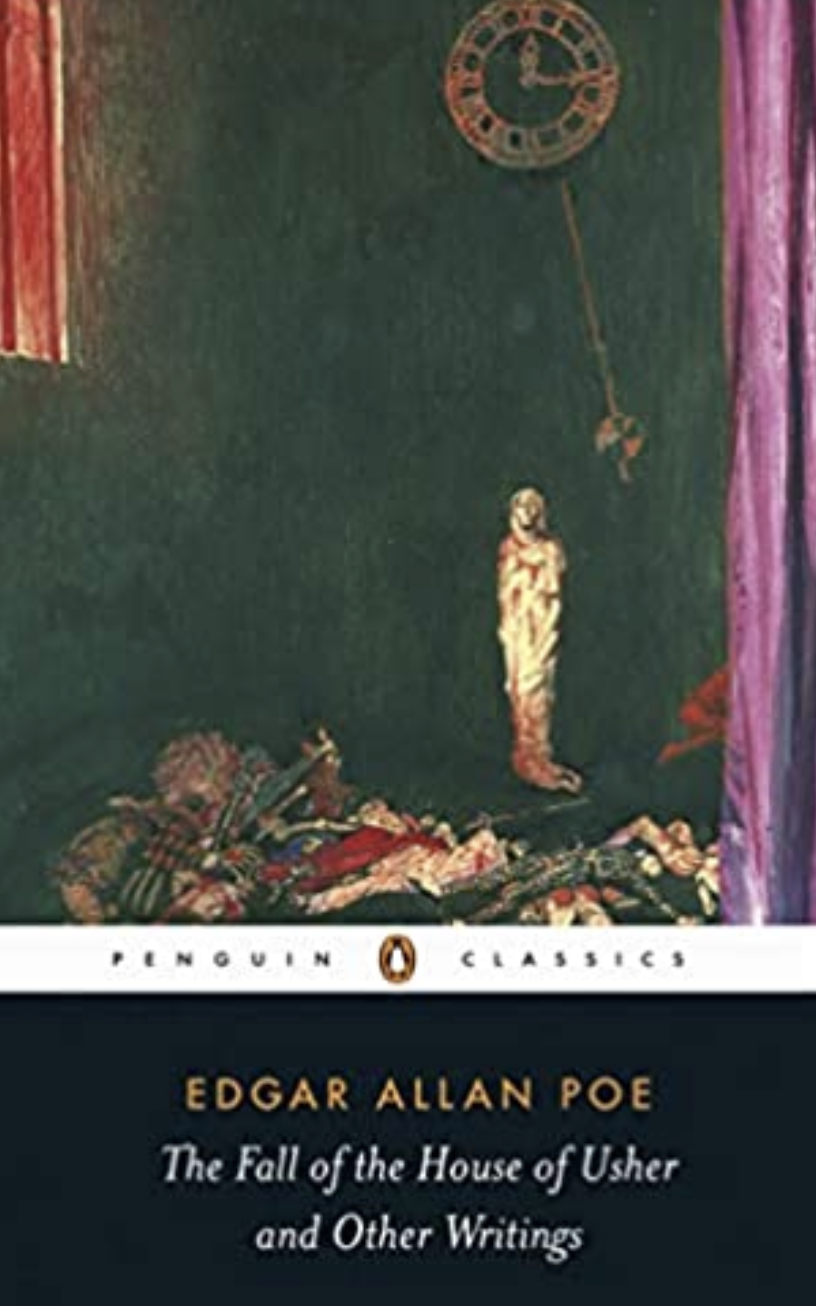 Author: Edgar Allan Poe, a 19th-century American writer, poet, and editor.
A mid-nineteenth-century American classic, supernatural horror pervades this narrative. Roderick Usher, the scion of the renowned House of Usher, writes to his childhood friend, the first person narrator, to visit. The story starts as the friend journeys on horseback on a gloomy and overcast autumn day, across a desolate land, to the melancholy house. The bleak walls and windows like vacant eyes staring out of the mansion are unnerving. The grounds have degenerated trees and a black ominous tarn; a barely perceptible zigzag fissure running from the roof to the tarn.
Roderick indicated he was severely ill in body and mind, appealing to his friend to help mitigate his maladies. The narrator remarks that though close to the reserved Roderick as a boy, he knows little about Roderick. Roderick belongs to an ancient family with peculiar sensibilities and a passionate devotion to art and music. It has no branches having maintained a direct line of descent. Hence, ‘House of Usher’ denotes both the family and the family mansion.
The building is extremely old and overgrown by fungi, though not dilapidated. While individual stones appear to be crumbling, the overall structure is stable, as if the decay is within. On entering by crossing a causeway over the tarn, Roderick’s friend is taken to his studio through dark and winding passages and staircases. The somber objects on the way and the perplexed expression of the physician he passes increase his sense of doom. The studio is very large with a lofty ceiling, and long narrow pointed windows high above. Tattered books and musical instruments lie among the antique furniture.
Roderick greets his friend warmly, who finds him greatly altered. Ghastly pale, he displays excessive nervous agitation like a drunkard or opium-eater. Roderick is constantly in the grip of an unknown fear. He has not left the house in years, and the very house seems to be one of the causes of his nervous fear as if it has a personality of its own. For long, his only companion has been his sister Madeline, who is suffering from a nervous cataleptic illness. On the first day, the friend watches her cross the room without her being aware of his presence. She takes to bed thereafter and is not seen again.
Madeline has been gradually wasting away, her physicians failing to diagnose the cause. Roderick dreads her demise which will leave him all alone. During the next few days, the friend tries to cheer Roderick up. They read, paint, and sing together. One painting makes a particularly strong impression. It is a picture of a long vault or tunnel with smooth and white walls that appear to be like an excavation far beneath the ground. There is no outlet or source of light seen in the picture, yet it is suffused with intense illumination. Roderick cannot bear strong light, sound, or anything but bland insipid food. Only the sound of some stringed musical instruments is pleasing to him. He plays the guitar composing mournful dirges, the friend afterward remembering the lyrics of the composition called ‘The Haunted palace’.
Roderick declares one evening Madeline has expired and wishes to keep her in a family vault for a fortnight before burying her to prevent her grave from being invaded by curious physicians. The friends carry the coffin to a small damp vault, originally a medieval dungeon, directly beneath the narrator’s chamber, through a copper-sheathed archway with massive iron doors.
Before leaving, they unscrew the lid of the coffin and find a faint blush on the face and bosom of the lady, apparently not uncommon. The friend notices that brother and sister look alike, Roderick stating they were twins sharing many peculiar sympathies. Roderick is plunged in bitter grief for days, and terrified of something as if laboring under an oppressive secret he cannot divulge. He stares vacantly but with alertness as if listening to a far-off sound.
One stormy night a week after Madeline’s death, sleep eludes the guest, who hears eerie noises during lulls in the storm. Roderick visits his chamber and opens the window. His friend detects restrained hysteria in Roderick’s demeanor. They watch whirlwinds outside by an unnatural gaseous light enveloping the mansion. To pass the fearful night, the friend reads to Roderick the romance ‘Mad Trist’ of Sir Lancelot Canning, the only book at hand.
Roderick hears with rapt attention as his friend reads aloud how the hero Ethelred breaks the wooden doors of the hermit’s hut. The friend is shocked to hear a corresponding cracking sound from some remote part of the house. He reads on about the slaying of the dragon and again hears a shriek like that of the dying beast. Roderick has gradually moved his chair to face the door. He is muttering with trembling lips, his head drooping and body gently swaying. The terrified friend continues to read about the shield of brass falling upon the floor of silver, and a muffled clanking reaches his ears.
The friend approaches the rigid and fixedly staring Roderick, and hears him mumbling that he has been hearing the sound for long hours and days, without the courage to admit they have put her in the tomb while yet living. They were hearing Madeline’s struggle to rip the wooden coffin, traverse the copper archway, and break the iron door. He springs up shouting he heard her footsteps on the stairs, and she stands outside their door.
The door opens to reveal Madeline with her bloody shroud, the evidence of a protracted struggle all over her. She reels on the doorstep and falls on her brother in the throes of death, Roderick falling along with her to his death. Roderick’s horrified friend flees into the storm. Crossing the causeway, he looks back at the blood-red setting moon through the zigzag fissure in the house, which widens, and the whirlwind tears the mansion asunder, its fragments drowning in the tarn.