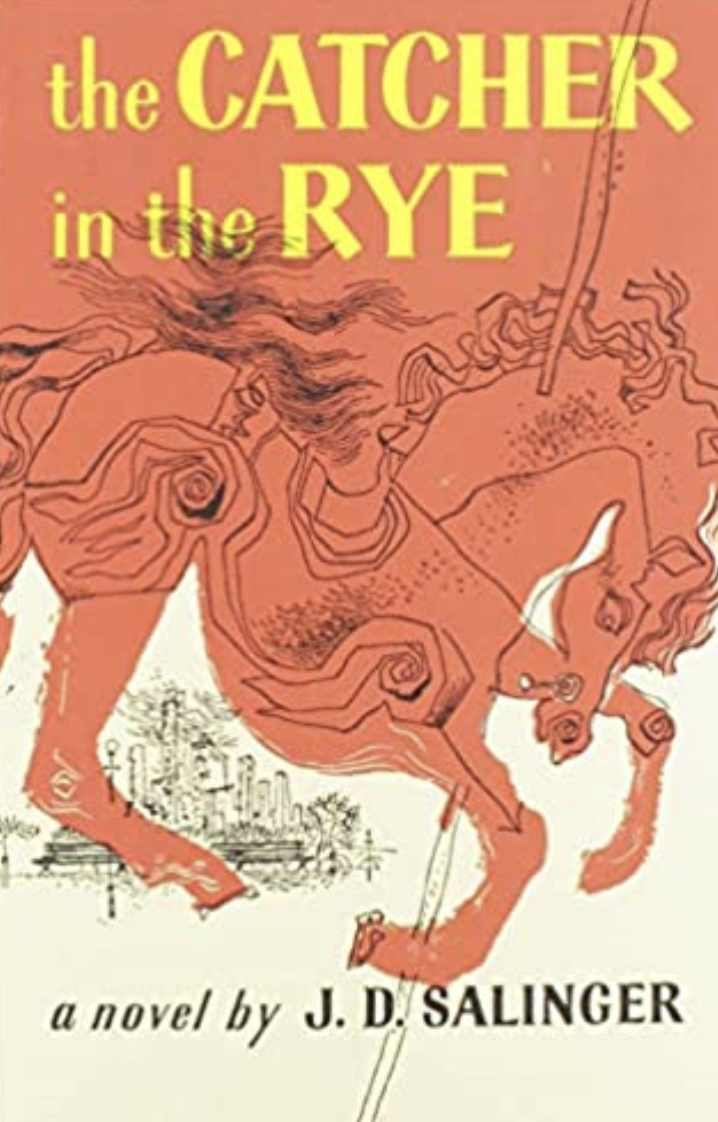 Author: J.D. Salinger, a 20th-century American author.
This twentieth-century coming-of-age novel has been criticized for its irreverent language, but its empathetic and accurate use of that language by the teenaged first-person narrator and protagonist to explore adolescent angst has made it one of the most influential novels in American literary history. The use of hyperbole and school-boy jargon has given the narrative its unique voice.
Holden Caulfield, seventeen, is undergoing psychiatric treatment near Hollywood, where Holden’s brother D.B. ‘prostitutes’ his writing talents. Holden narrates events around last Christmas, months ago, resulting in his ending up in this ‘crumby place’.
Holden is being expelled for ‘flunking four subjects out of five’ and ‘not applying’ himself, from Pencey Prep in Pennsylvania. Strong only in English, he previously left two other schools. He returns from New York on Saturday with the fencing team, having lost all ‘foils, equipment and stuff’ in the subway before the meet, and watches a football game.
He visits ‘nice old’ history teacher Spencer as requested, who plays ‘a very dirty trick’ on him, reading out Holden’s ‘crap’ answers. Talking to Spencer, he ‘shot the bull’ thinking about where the ducks at Central Park go when the lagoon freezes.
In his room, Holden puts on the peaked red hunting hat he bought in New York that morning, reading. He is ‘quite illiterate’ but reads a lot. Ackley from next room, with ‘mossy-looking’ teeth comes not taking any ‘goddam hint’ to leave, till Holden’s room-mate strong, handsome, self-assured Stradlater arrives.
Stradlater is a ‘secret slob’ who grooms himself but neglects to clean his razor. While ‘horsing around’ with Stradlater shaving in ‘the can’, Holden learns Stradlater’s date is Jane Gallagher whom Holden likes. Holden writes and later tears up a ‘descriptive’ English composition for Stradlater, describing his ‘brother Allie’s baseball mitt’ with poetry written on it. ‘Terrifically intelligent’ two years younger red-haired Allie died of Leukemia at eleven, Holden breaking all the windows of the garage with his fists, fracturing his own hands. Holden worries about Stradlater with Jane and attacks Stradlater hearing they spent the whole time in a car. Stradlater retaliates and bloodied Holden leaves four days early.
Holden decides to stay in a hotel till Wednesday when he is expected home for the holidays. In the train to New York, he meets a classmate’s mother introducing himself by a ‘phony’ name, falsely praising her ‘biggest bastard’ son.
Holden takes a room in a ‘goddam hotel full of perverts and morons’, watching a cross-dressing man and a couple squiring mouthfuls of water at each other from his window. Horny, he calls a girl, who is not interested. Holden actually wants to ‘shoot the crap’ with ‘old Phoebe’, his ‘so pretty and smart’ ten-year-old sister. Holden visits the hotel’s nightclub only obtaining coke being a minor, though tall with some grey hair, dancing with three girls from Seattle.
Imagining Jane with Stradlater drives Holden crazy. Jane is ‘not strictly beautiful’, but still ‘knocks him out’. Holden kissed Jane all over the face except the mouth when Jane’s ‘booze hound’ stepfather made her cry. They held hands in movies. Holden visits the club D.B. frequented but leaves after meeting a girl D.B. once dated.
Holden walks back ‘forty-one gorgeous blocks’ in the freezing cold. Depressed, he accepts the elevator guy’s offer of a ‘tail’ at ‘five bucks a throw’, but merely talks to the prostitute. Insisting the price is ten, not five, she brings the elevator guy who punches Holden, taking another five from Holden’s wallet.
Holden puts his bags in a strong box at Grand Central Station. His corporation lawyer father is ‘loaded’. Holden’s mother ‘hasn’t felt too healthy since Allie’s death’, and Holden ‘hated like hell for her to know he got the ax again’. Having breakfast, he meets two nun teachers, donating to them.
Hearing a boy singing “If a body catch a body coming through the rye” Holden feels better. Buying a rare expensive record for Phoebe, he looks for her in the park. Holden goes on his date with old friend Sally, ‘the queen of phonies’. He hates the ‘phony’ conversation Sally has with a ‘strictly Ivy League’ guy she recognizes at the play they watch. Holden asks Sally to run away with him though he cannot stand Sally, and they quarrel.
Holden meets Luce, his student advisor from Elkton Hills, who does not want to have a serious conversation. Holden gets drunk after Luce leaves and goes to the park, dropping Phoebe’s record. He cannot find any ducks, about which he had talked to all his cab drivers.
Late that night, Holden sneaks into their apartment waking Phoebe. Holden tells Phoebe why he hates all the ‘phony’ and ‘lousy’ students. When Phoebe asks him to ‘name one thing he likes a lot’, Holden remembers a friend from Elkton who was tortured and killed by fellow students for criticizing an influential boy.
Phoebe points out Holden is misquoting Robert Burn’s poem “If a body meet a body coming through the rye”, but Holden recites “If a body catch a body…”, visualizing himself standing ‘on the edge of some crazy cliff’ catching children about to fall off as the ‘catcher in the rye’.
Holden dances with Phoebe which ‘kills him’. When his parents return, he escapes to Antolioni, his English teacher from Elkton, sleeping on Antolioni’s couch. Waking to find Antolioni patting his head, Holden leaves immediately because people are ‘always perverty’ around him.
Holden leaves a note to Phoebe in school, who meets him in the museum with Holden’s hunting hat on and a big suitcase. Holden plans to run away, and Phoebe wants to accompany him, refusing to return alone. They visit the zoo, and then the carousel. In the rain from the park bench, Holden watches Phoebe on the carousel and feels ‘damn happy all of a sudden’. Holden does not disclose ‘how he got sick and all’, stating he misses everybody he spoke about.