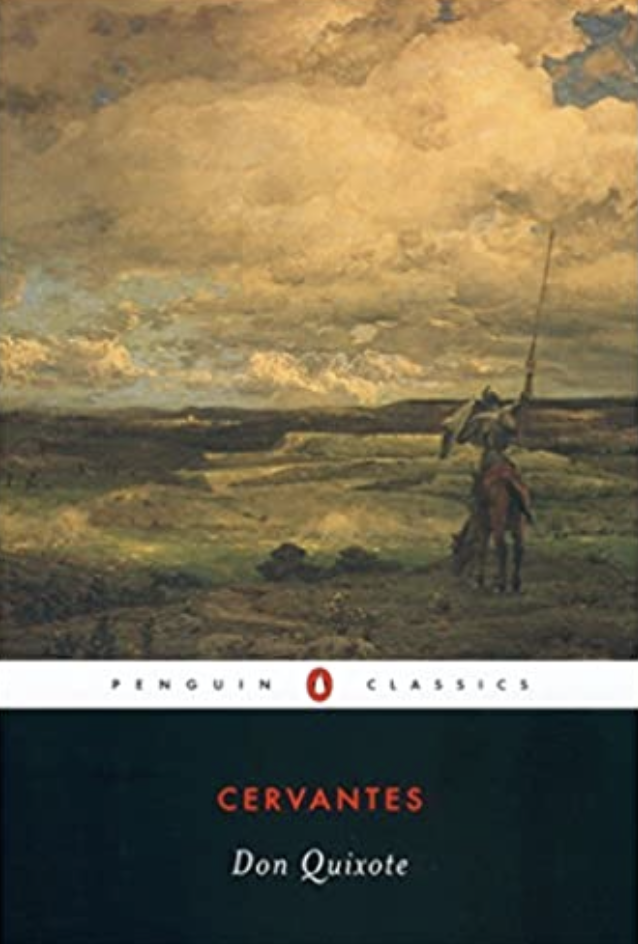 An epic satire by a Spanish contemporary of Shakespeare, this is a pioneering novel with ordinary people as principal players, instead of royalty or mythical beings. Only in the second part written much later, do a duke and a duchess appear. A gentleman of leisure – Alonso Quixano of La Mancha, reads popular tales of chivalry and heroic romances. A lanky man of about fifty, Quixano determines to restore chivalry in the present day by becoming a knight-errant.
Calling himself Don Quixote de La Mancha (Sir Quixote of La Mancha), and seeing in his emaciated horse a noble steed he names Rosinante (rocin=workhorse, ante=before/foremost), Quixano dusts his great grandfather’s rusty armor, lance and sword from the attic and begins his career as a knight-errant. Don Quixote chooses as his lady-love a peasant girl Aldonza Lorenzo he has never met from neighboring El Toboso, renaming her Dulcinea del Toboso.
In an inn imagined as a castle, the keeper performs the ceremony to dub Don Quixote a knight by reading solemnly from account books. He intercedes in a farmer punishing his servant, but the punishment is more severe after he leaves. He insists that merchants proclaim Dulcinea the fairest of all. When he charges at them, Rosinante stumbles throwing him off. A neighbor finds and brings him home.
This pattern is repeated throughout the novel, which ridicules the impractical and absurd notions of chivalry in popular literature. Don Quixote’s ravings are peppered with characters and incidents from these novels. He discourses wisely on many subjects in ornate language, making his audience wonder whether he is really the madman his actions show him to be. His niece and housekeeper conspire with his friends the curate and the barber and burn his books, walling up the library.
With simpleton neighbor Sancho Panza as his squire enticed with the promise of an island, Don Quixote travels again. Fond of his food and drink, Sancho Panza rides his beloved donkey Dapple and loyally defends Don Quixote though he realizes his master is unhinged. He speaks in proverbs, even when they are not quite applicable. The greatest charm of the novel might be Sancho Panza’s utterings in the Castillian dialect, completely lost in translation.
Their first campaign is against windmills imagined to be enchanted giants with long arms. Don Quixote thrusts his spear in its sails, which breaks the spear and throws both horse and master to the ground. He loses a part of his ear fighting to free an abducted princess, actually a lady traveling with attendants. Most discussions with people they meet ends with a learned speech on knight-errantry by Don Quixote. When they try to leave an inn Don Quixote considers a castle without paying, Sancho Panza is rolled in a blanket and thrown repeatedly in the air. Don Quixote attacks sheep imagining a great battle by the dust raised. Shepherds pelt him with stones, knocking out several teeth, Sancho Panza naming him Knight of the Rueful Countenance.
Don Quixote replaces his dilapidated helmet with a barber’s shining brass basin he finds, making his appearance more eccentric. He frees criminals going to become galley slaves. Sancho Panza meets the curate and the barber on his way to Dulcinea when Don Quixote performs penance in the wilderness. The friends disguise themselves and carry out a plan to cure Don Quixote, in the implementation of which they reunite three pairs of lovers separated by fate. Don Quixote attacks of wine-skins imagining them to be giants’ heads, the flowing wine imagined as blood. He is tricked into a cage to prevent escape. When released, he attacks penitents carrying a picture of the Virgin Mary, imagined as a captured princess. Thus he returns home at the end of the original book. Its immense popularity spawned an imitation by Alonso Fernandez, labeled the second volume of the novel. Cervantes then himself published a second part.
Sansón (or Samson) Carrasco, called ‘the bachelor’ having been to the university at Salamanca, explains that the great Moorish sage Cid Hamet Benengeli wrote this book. Carrasco joins the curate and the barber in trying to cure Don Quixote. Sancho Panza represents a village girl to Don Quixote as Dulcinea, now changed by enchantment. Disguised as a knight Sancho Panza is named Knight of the Grove and Knight of the Mirrors due to his shining armor, Carrasco fights Don Quixote to defeat and bring him home but is himself vanquished.
Don Quixote wishes to combat lions being transported, but the lions ignore him. Don Quixote adopts the name – Knight of the Lions. They accompany travelers to a wedding feast, becoming instrumental in uniting separated lovers. Don Quixote dreams of adventures exploring the caves of Montesinos. He fights puppets at Master Pedro’s show. They are rescued from the river when Don Quixote attacks floating mills in a boat.
Various pranks are arranged by the Duke and Duchess they encounter. Don Quixote is told Dulcinea’s enchantment will only end when Sancho Panza gives himself three thousand three hundred lashes. They ride a wooden horse blindfolded which apparently flies, to save enchanted duennas with beards. Sancho Panza finally gets his island to govern, and surprisingly turns out an able and just administrator for a week, after which an invasion is staged.
They meet bandit Roque, whose friend Don Antonio arranges a grand reception in Barcelona. Don Quixote cannot comprehend that the apparent admiration is actually ridicule. Carrasco, as Knight of the White Moon, defeats Don Quixote and extracts a promise to return home for a year. The knight and squire are captured and brought to the Duke and Duchess for further amusement at their expense involving a duenna Altisidora, who enact dying of a broken heart at Don Quixote’s rejection of her love.
Carrasco, in alliance with the duke, now takes the chivalrous lunatic home. Don Quixote dies shortly afterward of illness. On his deathbed, he renounces books of chivalry and stipulates in his will that his niece should not marry any man who has read them.

Lord of the Flies