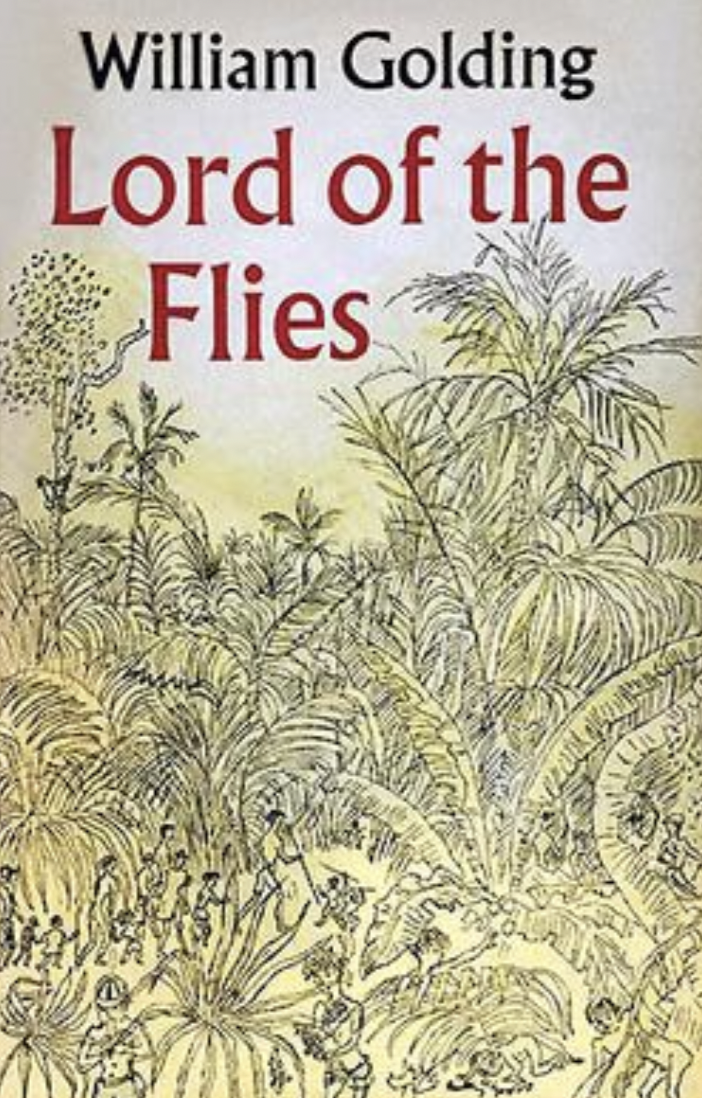 Golding takes the format of popular island adventures, particularly that of Ballantyne’s Victorian novel Coral Island, and paints a stark picture of human nature which is profoundly disturbing, — perhaps more so because the backdrop is lush bountiful nature, and the characters innocent schoolboys. Even the main characters are named after Ballantyne’s boys — Ralph, Jack, and perhaps Piggy for Peterkins. Unlike all previous stories of high adventure in which the boys conduct themselves in an exemplary manner, and evil is only encountered when faced with savages, Golding’s boys themselves lapse into savagery and give the reader a glimpse into the darkness in the heart of man.
An aircraft carrying British schoolboys, evacuated during a nuclear war, is shot down. Most of the boys survive though the pilot does not. They are stranded on an uninhabited tropical island. Ralph is a strong handsome boy who is a natural leader. He finds a conch shell and uses it to call the other boys. He is elected as their leader but has a strong contender in Jack, the head of a choir. Jack is initially quite friendly with Ralph but eventually sees him as a rival to be eliminated. Jack and his choir are fully clad in black, and the combination of Jack’s red hair and black clothes is ominous. Though there is enough fruit available in the forest, Jack decides meat is essential. His group is given the task of hunting, which culminates in full-blown bloodlust.
Ralph’s advisor and the brains of the group is a physically weak, bespectacled, asthmatic boy called Piggy. As his nickname suggests, he is plump and unsuited for physical labor, though wise beyond his years. He is the voice of reason among the wild castaways and strategizes how they can survive and attempt to be rescued. His glasses are used to start a fire on top of the hill to signal passing ships, but Jack and his followers neglect to tend to it as required, resulting in a ship passing them by when the fire dies out.
The boys are of varied ages and the youngest ones are called littluns by them. The bigger ones are similarly called biguns. One such bigun is Simon, a thin boy with long hair and the manners almost of an ascetic. This epileptic boy interprets nature and the world in mystical terms. Though he helps Ralph with various tasks, he often runs away to a secret hideout screened off by bushes and creepers. The boys start to fear an unseen entity, — a monster or ghost they call the beast. Of all the boys, including the rational and scientific Piggy, Simon is the one who correctly understands that the evil or beast is within themselves. He can never articulate what he understands to the scared boys exhibiting a false bravado.
Ralph supervises the building of a shelter while Jack supervises the hunting for pigs. Both of them try to lay down rules with different objectives, — Ralph in the name of establishing order, while Jack for the pleasure of disciplining those who break the rules. Even Jack is hesitant to kill the first time, but soon the hunters paint their faces with clay, and amid ferocious chants inciting to kill and spill blood, they kill a sow. A boy called Maurice plays the role of the prey, and other boys dance in an enactment of the kill. With every successive hunt, their inhibitions reduce, till even their fellow humans are in danger from them.
Piggy is derided for his attention to prosaic things like building a fire, a sundial, and a shelter. Jack hits him and breaks one of his lenses. Piggy notices that a littlun is missing, probably having died in the fire Jack first built and could not control. He is ridiculed for his bulk and criticized for not working. Piggy is doomed to be treated as a creature who is looked down upon and hunted, in spite of his exceptional intelligence.
Simon belongs to the opposite end of the spectrum of humanity. While Jack embodies all that is evil, Simon is surrounded by symbols of spirituality and religiosity. His secret alcove in the bushes with its candle-bud flowers almost implies a place of worship. He plucks fruits for the littluns. The twins, Sam and Eric who tend the fire see a parachutist dropping on the island one night, and assume it is the beast. Jack’s troupes hunt for it and Ralph joins them. They kill a boar and mount its head on a stick as an offering to the beast. They take flight when they see a hideous form, which is actually the dead parachutist, swaying from the trees. Simon observes the hunt, and he names the fly-covered head Lord of the Flies, which is also another name for Beelzebub.
Simon faints when he hears the Lord of the Flies telling him that the beast can never be hunted and killed, the beast lives in their hearts. He finds the parachutist and rushes down the mountain to inform others what the beast really is. The boys discern a rushing apparition in the storm and kill it believing it to be the beast. Ralph and Piggy are also among the killers of Simon.
All the other boys except Piggy and the twins had left Ralph for Jack. Jack, Maurice, and Roger attack Ralph’s group stealing Piggy’s glasses to make fire. Almost blind, Piggy accompanies the others to reason with Jack. The twins are captured and Piggy is killed by Roger dropping a rock on him. Ralph narrowly escapes being killed by Jack’s spear and becomes a fugitive. Sam and Eric give him food secretly. The boys roll stones down the mountain to kill Ralph and set the forests on fire to get him out. The fire, fortunately, attracts a ship and they are rescued by a naval officer who thinks that they are merely playing foolish games. Ralph weeps for Piggy and their lost innocence.

A Tale of Two Cities