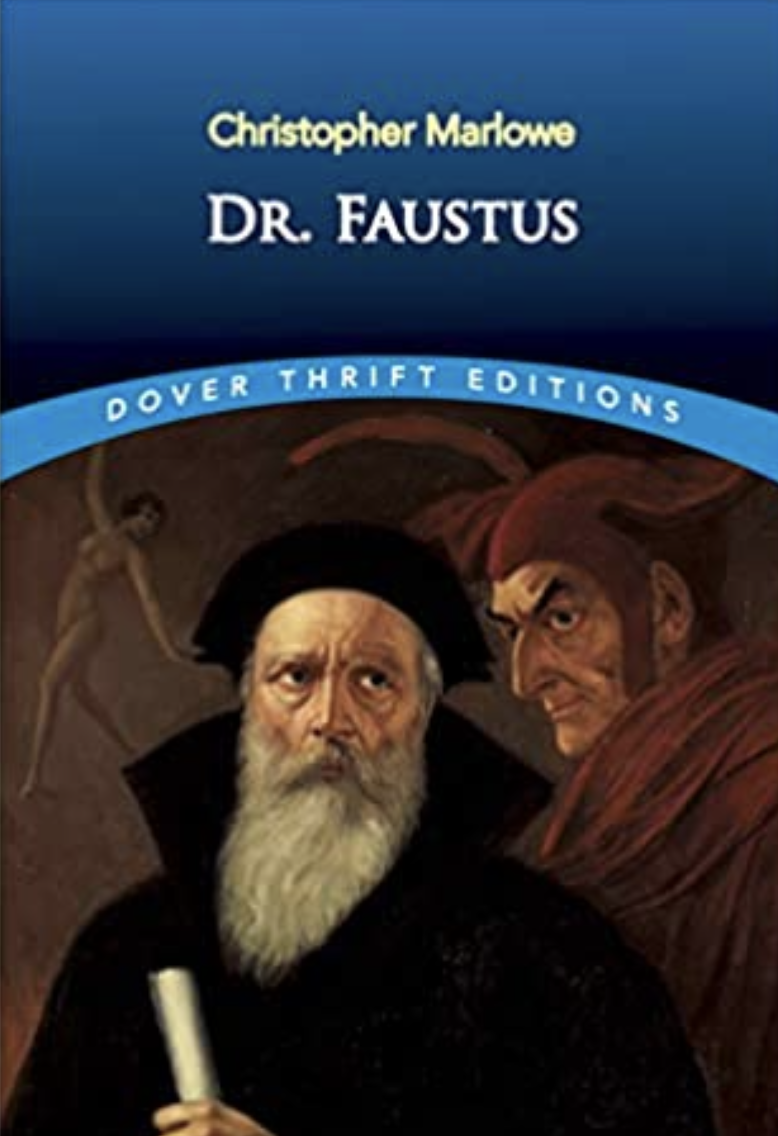 Author: Christopher Marlowe, an English poet and playwright of the 16th century.

This immensely popular Elizabethan play drawing on existing German fables, which first staged the concept of selling one’s soul to the devil, is available in two versions: ‘A text’ printed in 1604, and ‘B text’ in 1616, with considerable debate among scholars regarding which is the authoritative one. In the prologue, the Chorus introduces the protagonist John Faustus, an erudite Doctor of Divinity from Wittenberg, Germany. Like Icarus, whose wings melted flying close to the sun, the ambitions of Faustus makes ‘heavens conspire his overthrow’. The Chorus also delivers an epilogue at the end, lamenting Faustus’ ‘hellish fall’ due to ‘unlawful’ practices, ‘more than heavenly power permits’.
In his study, Faustus analyzes which subject to gain expertise in. He rejects logic, having already learned to ‘dispute well’; medicine, which ‘cannot make man live eternally’; law he considers ‘mercenary’; and divinity, his favorite, states ‘what will be, shall be’, – a fatalism he cannot accept. He decides on magic and necromancy since magic alone can bring him profit, delight, power, honor, omnipotence, ‘all things that move’ being at his command.
Faustus sends servant Wagner to fetch magicians Valdes and Cornelius. The Good and Evil Angel appear, the Evil Angel tempting Faustus to become ‘Lord and Commander’ of the elements, while the Good Angel calls this ‘blasphemy’, which will ‘heap God’s heavy wrath’ upon his head. Throughout the play, the Good Angel unsuccessfully reasons with Faustus, while the Evil Angel tempts him to sin. Faustus imagines the treasures his ‘servile spirits’ would bring him, and even believes he will ‘reign sole king’. When two fellow scholars hear from Wagner he is dining with the infamous magicians, they contemplate asking the Rector to intervene and ‘reclaim’ Faustus from the dark arts.
Faustus conjures the devil Mephistopheles with his incantations. Finding him ugly, Faustus asks him to return as a Franciscan friar, which shape ‘becomes the devil best’, Franciscan and other Catholic orders being detested in Marlowe’s England. Faustus realizes that Mephistopheles serves only one master – Lucifer. Mephistopheles says he was not sent by Lucifer but came of his ‘own accord’, as the devils ‘fly in hope’ to get the souls of those ‘in danger to be damned’.
Mephistopheles explains through ‘aspiring pride and insolence’, Lucifer and other rebel angels became ‘forever damned’ and banished to hell. Faustus asks how then is Mephistopheles now ‘out of hell’. Mephistopheles replies, ‘having tasted the eternal joys of heaven’, he is always in hell ‘being deprived of everlasting bliss’. Faustus sends a proposition through Mephistopheles to surrender his soul to Lucifer, provided Lucifer lets him live for twenty-four years with Mephistopheles to attend to him and ‘always be obedient’ to his will.
Lucifer accepts his proposition and requires Faustus to ‘write a deed of gift’ with his ‘own blood’ as ‘security’. Foster wonders why Lucifer wants his soul, and Mephistopheles replies, to ‘enlarge his kingdom’. Faustus cuts his arm but his blood ‘congeals’, and while Mephistopheles fetches fire to dissolve it, Foster ponders what this portends. Faustus finds ‘Homo, fuge!’, Latin for ‘Man, flee!’, inscribed on his arm, but reasons that if he flies to God, he will certainly be thrown to hell. Faustus being curious about where ‘the place that men call hell’ is, Mephistopheles clarifies that ‘hell’ is not ‘circumscribed’ in one place and has no limits. Whatever is ‘not heaven’, is hell.
Faustus wants a wife, but calling marriage a ‘ceremonial toy’, Mephistopheles brings a devil-woman, promising Faustus ‘fairest courtesans’. Mephistopheles gives Faustus a book of spells and answers all his questions except ‘who made the world’. The Good Angel pleads with Faustus to repent, and Lucifer appears with Beelzebub when Faustus calls upon Christ to save his distressed soul, contrary to his contract with Lucifer. To tempt Faustus, Lucifer parades the Seven Deadly Sins: Pride, Covetousness, Wrath, Envy, Gluttony, Sloth, and Lechery.
For twenty-four years, Faustus indulges in only petty magic tricks and pranks, apparently having forgotten his lofty aims. Mephistopheles takes him traveling across the world. In the Pope’s privy chamber in Rome, an invisible Faustus steals food and drink presented to the pontiff, and boxes his ears. In B text, Pope and Raymond, king of Hungary, torment Bruno, Archbishop of Rheims, – who is rescued by Faustus. For the German Emperor, Faustus conjures Alexander and his lady love in A text, and Alexander fighting Darius in B text. The knight of the court criticizing Faustus is made to grow horns. In B text, this knight conspires to decapitate Faustus, who grows a new head.
Minor characters provide comic relief, notably the Clown, whom Wagner makes his slave using spells; and villagers Robin and Rafe – called Dick in B Text, who find Faustus’ book of conjuring, using it to steal a wine goblet from a vintner. When they summon Mephistopheles, he turns them into an ape and a dog. A horse-courser buys Faustus’ horse, who warns the trader not to ride the horse into the water. Curious, he rides into a pond, the horse turning to hay. He tries to wake Faustus by pulling at his leg, which comes off. Faustus soon grows a new leg. Faustus entertains the Duke and Duchess of Vanholt by conjuring grapes out of season.
Faustus’ twenty-four years ending, he bequeaths his wealth to Wagner. He conjures Helen of Troy for the scholars. An old man asks Faustus to repent while Mephistopheles gives Faustus a dagger to stab himself with. Faustus finds hell striving with grace for the conquest of his soul. Unable to repent, he asks for Helen, kissing her. With one hour to live, Faustus begs for ‘one drop’ of ‘Christ’s blood’ to save his soul. When half-hour remains, Faustus begs for his duration in hell to be ‘a thousand years, a hundred thousand’, instead of eternity. He promises to burn his books, but the clock strikes twelve, and the devils carry him off. In B text, the scholars visit Faustus hearing ‘fearful shrieks’, and finds Faustus with ‘limbs torn asunder by the hands of death’.