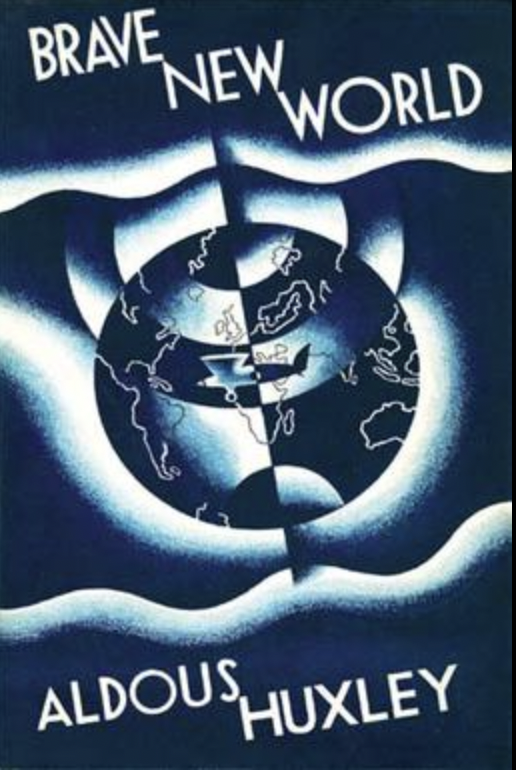 Author: Aldous Huxley, an English writer and philosopher of the 20th century.

One of the most enduring portraits of a dystopic future often compared with Orwell’s ‘1984’, Huxley’s world differs from the Orwellian in one important respect identified by Huxley. In Orwell’s 1948 masterpiece ‘1984’, desirable behavior is enforced in the totalitarian state by severe punishments and torture. In contrast, in the world imagined by Huxley in 1930, nothing remotely resembles torture; the only punishment being transfer to an island. State Control is enforced by physiologically, psychologically, and socially conditioning children, which determine their adult behavior.
The year is 632 A.F. or ‘After Ford’, the automobile pioneer ‘Our Ford’ having replaced the archaic ‘Our Lord’. People now make the sign of ‘T’ on their stomach, venerating Ford’s Model ‘T’. The planetary motto is ‘Community, Identity, Stability’.
The Director of the ‘Central London Hatchery and Conditioning Centre’ of the ‘World State’ is showing newly arrived students around. Children are not born but ‘decanted’ from beakers fertilized in test tubes. Embryos in bottles undergo chemical processes to determine their caste, – alpha, beta, gamma, delta, or epsilon, denoting their physiognomy and intelligence; the Director being alpha, and stunted sewage workers being epsilon. Lower castes undergo ‘Bokanovsky Process’, which obtains ninety-six twins from a single fertilized egg. In assembly lines, ninety-six identical twins work ninety-six identical machines.
Fertility being a nuisance, most women are sterile ‘freemartins’. Since ‘Everyone belongs to everyone else’, family, monogamy and romance are eradicated. Children are encouraged in ‘erotic play’, while adults having the same partner for long are censured. The words birth, parents, and family are considered ‘smut’. Children are conditioned to hate flowers and books using shrieking sound and electric shocks to ensure they do not pursue solitary hobbies later. The most effective conditioning occurs through ‘hypnopaedia’, with voices repeating slogans every night under their pillows.
‘His Fordship’ Mustapha Mond, ‘Resident World Controller of Western Europe’, one of only ten ‘World Controllers’, drops in and speaks of the past. ‘The Nine Years’ War’ beginning in A.F. 141 caused the great ‘Economic Collapse’. The Controllers chose stability through ‘World Control’, implemented by ‘ectogenesis’, ‘neo-Pavlovian conditioning’ and ‘hypnopaedia’. Intensive propaganda was made against ‘viviparous reproduction’; while museums were closed, historical monuments destroyed and books published before A.F. 150 banned.
Bernard Marx, an Alpha-Plus psychologist and ‘hypnopaedia’ specialist, feels inadequate being shorter than other alphas. He tentatively dates the ‘uncommonly pretty’ Lenina Crowne, a nurse who inoculates embryos. To her dismay, he wishes to fly her for a walk in the Lake District, instead of the usual round of ‘Electro-magnetic Golf’. Lenina’s friend Fanny repeats gossip that Bernard’s bottle was dosed with alcohol in his ‘blood-surrogate’ like lower castes. Having dated Henry Foster too long, whom Bernard furiously overheard discussing Lenina’s body like meat, Lenina accepts Bernard’s invitation to accompany him to a ‘Savage Reservation’ in New Mexico.
Lenina is horrified to see ‘Indians and half-breeds’ with primitive practices. She encounters old age for the first time as ‘World State’ members are youthful till they go to the ‘Hospital for the Dying’. They meet John, a White man, and his mother Linda, – a Beta-Minus who was lost and left behind on a visit almost twenty-five years ago. Bernard had heard from the Director he lost a woman here.
Linda is filthy and bloated, ostracized by the savages due to her conditioned promiscuity. In spite of diligently practicing the ‘Malthusian Drill’ to avoid pregnancies, Linda was pregnant on arrival, with no ‘Abortion Centre’ existing. John is not welcome in the native community, and was prevented from participating in adolescent initiation rites.
On Bernard’s return, the Director announces Bernard’s transfer to Iceland for non-conformist behavior, but is himself driven to resign when John publicly calls him father, a scatological impropriety. John, ‘The Savage’, becomes a curiosity, Bernard’s popularity rising as his keeper. Linda is shunned since a mother giving birth is pornographic. She takes ‘holidays’ induced by ‘soma’, a state-sponsored hallucinogenic narcotic, consumed daily by all in varying doses to escape reality.
John’s ideas and language are Shakespearean, as the only book he has read is Shakespeare’s ‘Complete Works’ found in an ancient chest by Linda’s lover Popé. In Miranda’s words from ‘The Tempest’, John exclaims at this ‘brave new world’. Lenina takes John to a ‘feely’, where actions on screen are not merely seen, but felt. Though he envisions Lenina as his Juliet, John is offended by Lenina’s lack of modesty and fidelity. He refuses to attend this time the gathering Bernard arranges regularly for people to meet John; offending the guests, particularly the ‘Arch-Community-Songster of Canterbury’. ‘Solidarity Service’ in a ‘Community Singery’ has replaced religion, with ‘soma’-induced frenzied ‘orgy-porgy’ song and dance. John spurns Lenina’s advances, calling her an ‘impudent strumpet’ like Othello.
After Linda dies in a ‘soma’-stupor, John throws away ‘soma’ being distributed to delta hospital workers. Bernard arrives with friend Helmholtz Watson, the Alpha-Plus lecturer at the ‘College of Emotional Engineering’, – with whom John shares an intimacy. Helmholtz, dubiously considered ‘too able’ and reprimanded recently for writing on ‘solitude’, now joins John in destruction. All three are arrested and face Mond, who tells Helmholtz that he too rebelled in his youth as a physicist, but chose to join the controllers. Bernard and Helmholtz are exiled to Falklands, not real punishment according to Mond as they will find more like-minded people.
Mond shows John the Bible and other banned books in his safe. He explains people believed in God because they were conditioned to. God is now superfluous as perfect stability and happiness have been achieved. John says he chooses God, sin, freedom poetry, and the right to be unhappy. John retreats to an abandoned air-lighthouse, living without modern technology. A secretly made ‘feely’ of ‘The Savage’ whipping himself in consternation over Lenina attracts multitudes, pain being a fascinating horror never experienced by them.
Lenina arrives in a helicopter, John passionately lashing himself and Lenina, culminating in the crowd’s conditioned ‘orgy-porgy’ excitement. Recalling next morning his long-drawn ‘soma’-fueled sensuous frenzy, John hangs himself in mortification.